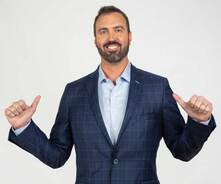 Unafraid to speak his mind, Jesse has a natural ability to connect with and engage his audience. He approaches all topics with knowledge and cutting humor. A former Marine Corps combat veteran and former congressional candidate, Jesse brings his own unique experiences to his role as host of “The Jesse Kelly Show” each day.

Jesse Kelly is the host of ‘The Jesse Kelly Show’ on 950 KPRC in Houston, TX and ‘I’m Right’ on The First TV, a bold, new news and talk channel on Pluto TV. Unafraid to speak his mind, Jesse has a unique ability to connect with and engage his audience across all platforms. Jesse was born in the Ohio Rust Belt to a construction family. Seeking work, his family moved to Montana when Jesse was ten years old. He grew up hunting, fishing, and being part of his family’s construction business, which is where he learned his work ethic from his father: work hard, make no excuses, no complaining and make something of yourself. Having always respected the armed services, Jesse joined the Marine Corps in 2000 and on 9/11, watched the towers fall from inside his barracks. He later deployed to Iraq as an infantry Marine during the Second Persian Gulf War and received an honorable discharge after four years. Upon his return from Iraq, Jesse rejoined the family business, now in Arizona, which required him to drive to various construction sites around the state. It was at this stage of his life when Jesse really got his taste of news talk radio and politics.

​While Jesse has been a history buff and avid reader his entire life, he enjoyed that talk radio was the intersection where history, storytelling and entertainment crossed. In 2010, with no political experience to speak of but many opinions to share, Jesse decided to test the political waters and ran for Congress in a Democratic-controlled district of Arizona. Jesse was a virtual unknown in the race but was only narrowly defeated by Rep. Gabrielle Giffords. The race initially ended in a vote recount. As a Congressional candidate, Jesse recognized the power of radio and used it as a cornerstone of his political campaign. After his Congressional run, Jesse continued to be a major voice among conservatives, using his large social media following as a platform to continue many of the conversations started on the campaign trail. One particular thread on Twitter caught the eye of a powerful Houston radio host, Michael Berry. Berry asked Jesse to come on his radio show and quickly identified Jesse as “having a special talent he hadn’t seen before.” Michael Berry encouraged Jesse to try for a career in media and pushed to get him his own show. In 2018, Jesse Kelly was offered an hour-long talk radio show on 950 KPRC in Houston and in less than a year was given a two-hour show, which he hosts today. Jesse approaches all topics with his unique insight, knowledge and cutting humor.