The Best of Todd starnes 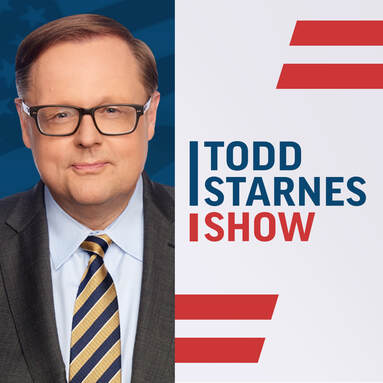 After a successful 14-year run on FOX NEWS, it was so important to Todd Starnes to have an independent conservative voice; he bought his own hometown radio stations-KWAM AM/FM, Memphis. His daily radio, audio and online platforms now reach millions. Nearly 300 radio stations carry Todd's daily commentary with 50 carrying his daily talk show. Todd's recent metrics include 800,000 average monthly listens to his podcasts, one of the highest in his category. His website ToddStarnes.com has seen 1,120,000 average monthly views.

An award-winning journalist, talk radio host, and commentator, Starnes continues to build his loyal audience by blending his signature humor and wit to deliver compelling interviews with U.S. presidents, top newsmakers and celebrities.
Todd is an ever-popular speaker averaging more than 25 personal appearances annually and at times drawing crowds of over 5,000 fans. He has authored seven books, including his most recent, Our Daily Biscuit: Devotions With A Drawl and Amazon top 10 best sellers; Culture Jihad, The Deplorables, and God Less America.
Starnes is a regional RTNDA Edward R Murrow Award winner and was recognized by A.P. with the Mark Twain Award for Storytelling. He is a frequent guest speaker at conferences, universities and at special events like CPAC, Values Voters Summit and The Ronald Regan Ranch.